The Brevard Fault, a geological treat!

Evidence of a Multi-Continent Pile-up in Rosman, NC

The town of Rosman, NC is a modest little mountain town with a history of greater activity and size than its present condition might suggest. This history is a fascinating story of lumber operations, tanneries and a railroad gateway into the mountain regions to the west. The remains of the hustle and bustle of the past can be found at different locations around Rosman if one knows where to look. 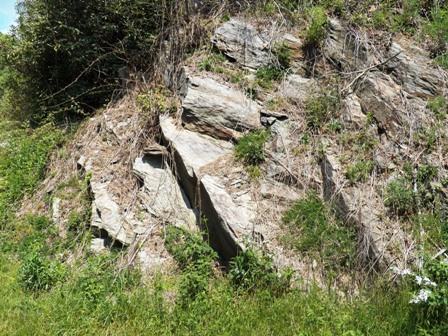 Rock Striation from the Brevard Fault in Rosman

This, however, is not an article about the recent history of Rosman. No, we are going to travel much further back in time than the turn of the twentieth century for this story, but it begins with an examination of some modest rock outcroppings just outside Rosman that, like the town itself, points to a past of greater activity and size. In this case it is a geologic past that took place over the course of hundreds of millions of years and is written in the rocks just outside Rosman, NC.

According to Brevard College Geology Professor Dr. Jim Reynolds, the best place to begin is 450-500 million years ago (give or take a few million years), during what geologists call the Ordovician period. The landmasses looked very different during this time and the proto-continents of North America (called Laurentia) and Africa (called Gondwana) were separated by three ocean basins and two island chains. The island chain closest to Laurentia is called the Taconic islands and the chain closest to Gondwana is called the Avalonian islands (obviously, they weren’t called that back then since there was nobody around to name them). 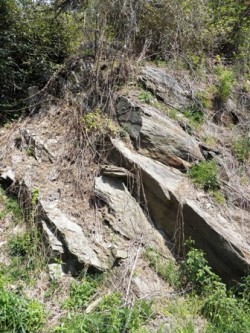 The series of events that followed and that are written in the rocks around Rosman; in other locations along the eastern front of the Appalachian mountain chain; and as far southwest as Alabama might best be described as a slow-motion multi-car pile-up… a REALLY slow-motion pile-up. The first crash takes place during the Ordovician period when Laurentia was sitting there minding its own business and the Taconic islands came careening in (careening in geologic time mind you) and slammed into Laurentia. Now, in defense of the Taconic islands, it is true that Laurentia was not really just sitting there but was, in fact, moving toward the Taconic islands, though you would never get Laurentia to admit that. The Taconic islands might also point out that they were being pushed forward by the Avalonian islands and Gondwana.

Like any crash, the Taconic event created a bit of a mess at the point of impact and the first generation of the Appalachian mountain chain was formed. But the pile-up wasn’t over. After the Taconic islands slammed into Laurentia their movement reversed as they were welded to the larger land mass and another crash became inevitable as the Avalonian islands and Gondwana continued their movement toward Laurentia.

The Acadian event is the name given by geologists to the second impact when the Avalonian islands crashed, along with Baltica (proto-Europe) further to the north, into Laurentia and the former Taconic islands. This took place in the Devonian period approximately 350-400 million years ago. While it may appear that the Avalonian islands just were not paying attention, given that they had at least 50 million years to survey the situation, their claim that they were “caught between a rock and a hard place” should not be completely discounted and, ultimately, the crash could not be avoided and the second generation of the Appalachian mountain chain was born. At approximately the same time Siberia plowed into the backside of Baltica to form the Ural Mountains (it was a veritable demolition derby) and the proto-continent of Laurentia became Laurasia. 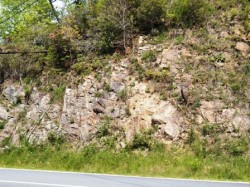 Poor Gondwana: like the last car in a multi-car pile-up, the blame appears to rest with this ancestor of Africa. It had plenty of time to see what was happening up ahead, but made no move to avoid its fate. During the Permian period of 250-300 million years ago it impacted the back-end of what had been the Avalonian islands, but were now a crumpled part of Laurasia. This final crash created the Alleghany Mountains and was the final piece in the puzzle of continents that formed the super continent, Pangæa. Maybe Gondwana knew it would be blamed for all three crashes because soon after impact (soon in geologic time) it began moving away from Laurasia like a hit-and-run driver. Unfortunately, Gondwana’s attempt to leave the scene without a trace was for naught as it left a piece of itself attached to Laurasia and geologists found this piece under the sediment of the Carolina coast.

Professor Reynolds showed this reporter a geological map of the southeastern United States. The remains of the geologic pile-up are easily seen in the line that forms the Brevard Fault, the same fault that runs right through the little town of Rosman, NC and can be seen in the rocks of the Rosman outcroppings. No need to worry, however, the descendents of Laurasia and Gondwana have retreated to their respective locations across the Atlantic ocean and will continue moving away from one another for quite some time.

The contributor of this piece was the late Sid Cullipher. He was an outdoor enthusiast who was fascinated by all aspects of the natural world.  Sid was the owner of Headwaters Outfitters, a local Rosman business just around the river-bend from the Rosman Outcropping. Headwaters Outfitters offers self-guided canoe and kayak adventures and guided fly fishing on the French Broad River and its tributaries, as well as boats, paddling and fly fishing gear for sale.